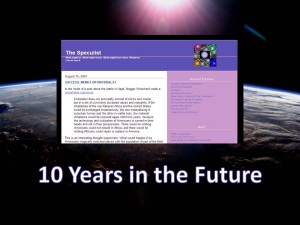 This month marks the 10-year anniversary of Phil and Stephen’s collaboration. This week they look back over a decade of tracking the future.

Here’s a small sample of what were talking about 10 years ago:

Success: Memes or Materials? |  Still Number One! |  Pop Quiz! |  There’s a Hole in the Bottom of the Sea |  Affordable Beauty |  No Matter What, He’s Wrong |  The Next Ten Years: Some Speculations |  A Fisking Too Vigorous |  Going the Way of the Slide Rule |  Energy Punditry 101 |  Encyclopedia Galactica |  War of the Worlds II |  Here’s a Trend… |  The Future of Wealth |  10 Predictions |  Bursting the Wi-Fi Bubble |  Our First Attempt at Global Warming |  Tiny Cameras Everywhere |  Now That the Idea Has Been Killed |  Wanna Bet? |  The Most Powerful Force? |  Navigating Possibility Space |  Seven Questions About the Future |  Man on the Run |  What Should Have Been |

So what has changed most in the intervening decade? What are the biggest surprises? And what is yet to come?

Tune in and explore

New Technology Podcasts with The World Transformed on BlogTalkRadio
WT085