A convergence of emerging technologies and emerging possibilities lies at the heart of this, the greatest period of transformation in human history. The World Transformed explores how those transformations will impact us individuals, as a society, and as a civilization.

In 2005, Stephen Gordon and Phil Bowermaster started a podcast called FastForward Radio. In fact, the first couple of installments may have just been called “The Speculist Radio Show” – reflecting the name of our blog dedicated to futuristic topics, which we had started a couple of years earlier. But we wanted to give the show its own identity, and “fast forward” seemed to capture the idea that change is accelerating and that the future is going to be here, as we have said so many times now, sooner than you think.

It was a lot of work, but a lot of fun, too. We managed to do 25 or so shows in the first two years, averaging about a show a month. We used various hosting tools during that period, most of which have since disappeared. Few if any of those original shows survived. In 2007, we signed on with Blog Talk Radio and were able to ditch the post-production in favor of live shows. Suddenly we could do a show every week! We could have guests! (That was no easy task when we were recording all the tracks separately.)

FastForward Radio was a weekly, hour-long show in which we talked about the future and accelerating technological change that is shaping it. We talked a lot about artificial intelligence, nanotechnology, life extension, and related topics. We talked about new technological developments and new scientific discoveries, and what these might mean for humanity now and going forward. And then every now and then we would completely geek out with a show about Star Trek or Star Wars or the best science fiction movies of the previous year. We were proud to welcome a wide range of guests to the show, thought leaders from a variety of fileds and areas of interest.

Then, in 2009, we took it up a notch by doing a special series of shows with not just one guest, but a whole panel of experts on a variety of futuristic subjects. Some of our favorite guests from over the years came back to talk with us again, and some new friends appeared for the first time. We called that special 10-part series The World Transformed.

The series provided an opportunity to go in-depth on some of the intriguing and often downright mind-blowing topics that we had discussed over the past four years. We explored how not only our thinking is being transformed, but how humanity, the material world, and reality itself, are changing before our eyes.

In 2011, we did it again with The World Transformed 2, which was so packed with startling ideas about the future that it took 11 shows to do our 10-part series. That’s right: we took it up to 11.

Liking that name, we eventually decided to adopt it as the full-time name of the show. 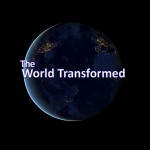 Today, the World Transformed carries on as your guide to an astounding future that lies ahead – one that is probably closer than you think, and one that you have an important role to play in making happen. We continue to explore emerging technologies and emerging possibilities across the fields of technology, science, business, academia, government, and entertainment. Guests on the show include leading figures from each of those fields. We recently aired our 800th show, and are coutning down to the big 1,000th.

Now airing 1-2 times per week, the show is rapidly growing and attracts up to 20,000 live listens, downloads, and views each month on Blogtalk Radio, iTunes, and YouTube.