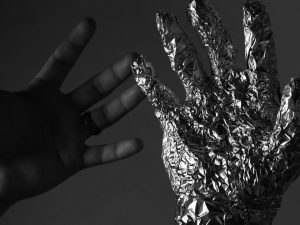 Phil and Stephen discus the economic consequences of rampant automation.

According to Monetary Watch, the Changying Precision Technology Company focuses on the production of mobile phones and uses automated production lines. The factory used to be run by 650 employees, but now just 60 people get the entire job done, while robots take care of the rest. Luo Weiqiang, the general manager, says the number of required employees will drop to 20 at one point. Despite this reduction in staff, not only is the factory producing more equipment (a 250% increase), but it’s also ensuring better quality.

That’s what Amazon CEO Jeff Bezos appears to be thinking, as his Seattle-based web giant has contemplated a two-story, automated grocery store in which a staff of robots on the floor upstairs grabs and bags items for shoppers below.

The ground level of the futuristic prototype — a supermarket-sized version of its recently unveiled “Amazon Go” convenience store, with a bigger layout that could span anywhere between 10,000 and 40,000 square feet — would be devoted to goods that shoppers typically like to touch, sources briefed on the plans told The New Post.

These 23 Principles Could Help Us Avoid an AI Apocalypse

At a recent gathering, a group of experts [came] up with 23 principles to steer the development of AI in a positive direction—and to ensure it doesn’t destroy us.

The new guidelines, dubbed the 23 Asilomar AI Principles, touch upon issues pertaining to research, ethics, and foresight—from research strategies and data rights to transparency issues and the risks of artificial superintelligence.

Of the 23 values, several are especially relevant to our discussion:

10) Value Alignment: Highly autonomous AI systems should be designed so that their goals and behaviors can be assured to align with human values throughout their operation.

11) Human Values: AI systems should be designed and operated so as to be compatible with ideals of human dignity, rights, freedoms, and cultural diversity.

13) Liberty and Privacy: The application of AI to personal data must not unreasonably curtail people’s real or perceived liberty.

14) Shared Benefit: AI technologies should benefit and empower as many people as possible.

15) Shared Prosperity: The economic prosperity created by AI should be shared broadly, to benefit all of humanity.