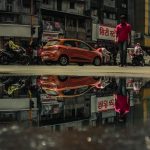 Phil and Stephen discuss why “reality” is a trickier proposition than we think.
A neuroscientist says your ‘reality’ could be entirely different from the person sitting next to you — and you’ll never know how much

The broader point that Eagleman is working towards here is that everyone’s reality is subjective. We’re all trapped in our own brains but laughably confident that we’re experiencing the world as it truly is.

The Impossible Mathematics of the Real World