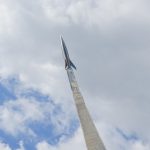 Phil and Stephen discuss the eclipse, the top scientific discoveries of the year, a new spacesuit from SpaceX, and the airplane that may take us anywhere we want to go…in just four hours.

The 10 Most Significant Scientific Discoveries Of the Year (So Far)

It appears to be more of a flight suit than one designed for spacewalks.

Space Could Leave You Blind, And Scientists Say They’ve Finally Figured Out Why

Skylon: The Plane That Can Fly Anywhere In The World In 4 Hours
GEEKOUT:

How to podcast – from a couple of guys that have been doing it since the beginning.

1. Listen to a lot of podcasts
2. Make it about something you care a lot about
3. It would help if that topic is something there aren’t a million podcasts about already – (there are plenty of shows about politics for example)
4. Don’t script
5. But have topics that you are familiar with to talk about.
6. Have a cohost
7. Show your sense of humor… let your audience get to know you.
8. Have guests, but not too soon.