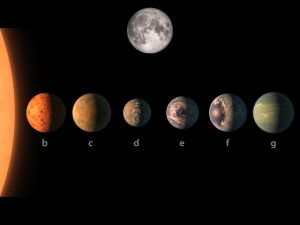 Life may have evolved on at least three planets within a newly discovered solar system that is 39 light years from Earth, it was announced last night.

Who is able to land on the lunar surface? Elon Musk and Robert Bigelow. Musk’s rockets—the Falcon and the soon-to-be-launched Falcon Heavy—are built to take off and land. So far their landing capabilities have been used to ease them down on earth.

Space Startups Are Booming in the Mojave Desert

Inside a series of nondescript buildings in the ­driest desert in North America, an entrepreneurial enclave is chasing the next frontier of commerce.