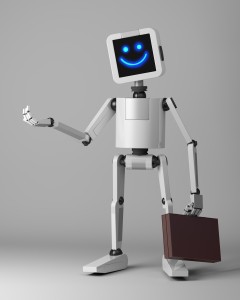 Phil and Stephen discuss the tremendous career progress that robots seem to be making.

ROSS is a piece of artificial intelligence software. It uses the supercomputing power of IBM Watson to comb through huge batches of data and, over time, learn how to best serve its users.

A new entity called The DAO, created using the Bitcoin-inspired financial platform Ethereum, has collected more than $100 million worth of cryptocurrency since late April, and will use the funds to support projects in the sharing economy. The DAO is being touted as a model for a new kind of organization, created and run using blockchain software rather than conventional corporate structures.