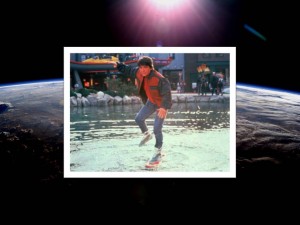 Next year is not only the 30th anniversary of the release of the original Back to the Future, it is the year that Marty and Doc travel to at the end of the film. And it is the year that the movie Back to the Future II is set in (at least initially.) What do the Back to the Future movies tell us about the year 2015? They tell us that we will still be using fax machines, that we will have desktop fusion devices, that movies will be full 3-D and immersive with no need for glasses, and — most importantly — that the skateboard will have evolved into a the magical, amazing Hoverboard.

None of these predictions seem particularly profound, or even accurate, but it is interesting how one item on the list has captured the popular imagination. Do we want movies that jump off the screen and attack us? Maybe. Do we want to power our vehicles with the oh-so-convenient Mr. Fusion? Perhaps. Do we want Hoverboards? Damn right, we do. And people are working on making it happen.

What is it that makes some far-fetched-sounding ideas about the future achievable goals, while others remain interesting, but remote, possibilities? Hosts Phil Bowermaster and Stephen Gordon explore this question, and apply it to such widely divergent future technologies as:

Human Cyborgs (also here) — do you want to be Robocop or the Six Million Dollar Man?

The ever-popular flying car — a technology that keeps being “invented,” and yet somehow remains elusive.

The ambulance drone — who saw that one coming?

…as well as other technologies. Which of these will capture the imagination the way the hoverboard has? And which will remain elusive and remote possibilities?