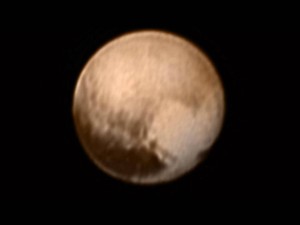 First it was a planet that wasn’t there.

Then it was a planet.

Then it got demoted. Some people were okay with that; some were kind of ticked.

But whatever it is — planet, dwarf planet, planetoid, round rocky thing out there past Neptune — the New Horizons’ Long Range Reconnaissance Imager (LORRI) is closing in on Pluto, giving us our first up-close glimpse of this distant and mysterious body. We’ve already learned that Pluto has a great big heart (see image above.) What other secrets is it about to reveal?

Tune in and explore as  Phil and Stephen discuss our mission to Pluto and other futuristically delicious topics:

Waves Adding Power to the Grid