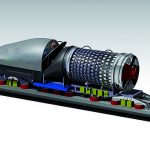 A 2016 study that claims feeding cows small amounts of seaweed along with their normal diet of grass can reduce methane emissions by up to 99 per cent.

Researchers in the US have reported what they believe is a first-of-its-kind reversal of brain damage, after treating a drowned and resuscitated toddler with a combination of oxygen therapies.

In early July, scientists in China revealed they had used a “spooky” property of the universe to pull off teleportation between the ground and space for the first time.

‘Doctor Who’: The 13th Doctor is a woman, Jodie Whittaker