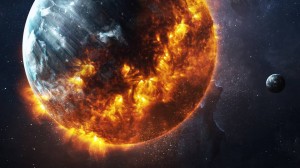 Phil and Stephen discuss why the end may be near. Is it time to book passage to Mars?

How virtual reality can save humanity

Truc de Ouf’s Gentry Lane says society is losing its humanity, but a powerful storytelling tool like VR can help revive it.

Panarchy 101, or How I Learned to Stop Worrying and Love Global Collapse

Like air moving from one balloon into another, the collapse of an archaic system actively drives the emergence of a new system.

How to Solve a Mass Extinction Event

“A typical person is more than five times as likely to die in an extinction event as in a car crash,” says a new report

SpaceX may have just changed the world with a tweet.

It began with a Tweet. On Wednesday, April 27, SpaceX posted two photos on Twitter, announcing plans to send a Red Dragon space capsule to Mars “as soon as 2018.”