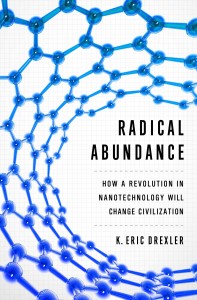 I’m reading K. Eric Drexler’s new book Radical Abundance, which explores the impact of atomically precise manufacturing (APM). Drexler predicts that APM will be with us soon and that it will transform the global economy in ways that can be compared to the industrial revolution of the 18th century or the advent of agriculture some 10,000 years ago. That is to say, he predicts it will be among the biggest shifts that have ever occurred.

Drexler compares the introduction of APM with the digital revolution of the past few decades, asserting that APM will essentially turn the production of physical goods into a form on information technology. Just as digital technologies made it possible to produce unlimited copies of information products (books, recorded movies, music) at essentially zero cost, APM will enable the production of physical goods at a tiny fraction of the cost of producing them today — enabling a world of radical abundance per the book’s title. This transition will not come without problems, however. Imagine the kind of disruption which has occurred in the music business over the past decade and a half applied to manufacturing, agriculture, and energy production. The elimination of infrastructure, businesses, and employment will be staggering. Drexler warns that with the introduction of APM we may face a period of “catastrophic success.”

That’s an interesting turn of phrase. We’re all familiar with the concept of “creative destruction,” wherein a new technology or set of technologies come along and supplant the old order — taking businesses and livelihoods with them, but producing far more opportunity than they eliminated. Catastrophic success, it would seem, is an advanced form of creative destruction.

I’ve written extensively over the past couple of years (at the Transparency Revolution blog) about the possibility that automation may be behind some of the long-term problems we’re seeing with the employment picture. Just last week, observing a long-term drop in the number of people employed in the manufacturing sector, I wrote:

The standard argument is that manufacturing as a whole must now be seen as a quaint, buggy-whip-making type activity — one that technology and economic growth have decreed is no longer a viable creator of jobs. But not to worry! The economy marches on, creating more and better opportunities for all those folks displaced from manufacturing jobs. Automation is simply replacing drudge work, as it always has. The real economy is in information, now, not stuff. Everyone has the chance to move up the value chain.

The problem with that argument is that our machines are far better at working with information than we are, except where it comes to actually understanding information, where we still have a bit of an edge. Automation is poised to start killing white-collar jobs with the same ruthless zeal that it used in going after blue-collar jobs. In fact, the use of the future tense in that sentence is superfluous. This is already happening. How else can we account for an economy that is growing overall — however slowly — while the total number of people who work continues to go down?

Not only is technology eliminating jobs, our reliance on it makes it harder for people who are not part of the workforce to join it (or to get back into it.) For example, people who are employed tend to have larger, more current, and more viable social networks than people who aren’t. A returning veteran or a recent college graduate or someone who has been out of work for six months or so can’t rely on social technology, which is driving more and more of the job-search / hiring pr0ocess, to give them the same boost that it gives to others — especially when there is already a presumption in place against hiring the unemployed. Technology is a great enhancer and accelerator of things, including being left out.

If Drexler is correct, we’re no longer just talking about automation replacing jobs in certain sectors of the economy; we’re talking about whole sectors of the economy changing beyond recognition, if not disappearing altogether. The upside is huge: cheaper, better everything — an era of plenty unlike anything we’ve ever seen before. But it’s unclear how we transition from the one era to the next, how we minimize the catastrophe while maximizing the success.

We’ll discuss this idea on this week’s The World Transformed. Join us: