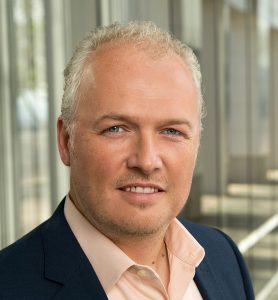 How can businesses stay agile and competitive in the face of massive data volumes and a growing need for real-time answers, decisions, and responses? In his new book The Sentient Enterprise, data management executive Oliver Ratzesberger, along with co-author Mohanbir Sawhney, outlines a new methodology for aligning data, systems, and people within the organization to make agility and decision-making scalable commodities.

“Companies are looking for a roadmap,” says Oliver. “There are so many technologies to choose from that executives struggle knowing where to start. Drowning in technical decision-making, these leaders lack the focus and time they need to paint a multi-year roadmap for getting the enterprise to operational excellence.

“The Sentient Enterprise is like a North Star for companies, showing them where they can take their businesses. It outlines a five-stage maturity model that focuses not on bits and bytes, but rather on the core capabilities businesses need to scale agility and decision-making.”

The core to understanding the new model begins with some very simple observations. An enterprise is made up of people. Each individual within the organization is a sentient being. As humans, we share in some common behaviors and tendencies: we listen, we think, we interact, we learn. These traits are critical to business success, and yet they are enormously difficult to scale. They do not transfer easily from the individual to the group.

“The problem is that the more of us you put together in a company, the less we do those things,” says Oliver.

In other words, an enterprise made up of hundreds or thousands of sentient beings fundamentally lacks the ability to listen, to think, and to make decisions. It is quite a paradox.

It was interest in this paradox that brought Oliver, Chief Product Officer for Teradata, together with his collaborator, Mohanbir Sawhney of the Kellogg School of Management. An initial meeting between the two in 2013 led to an extended conversation in which they began to sketch out the core capabilities that make up the model – quickly coming to the realization that what they were describing was the basic blueprint for a sentient enterprise.

“The five stages of maturity capability are not linear,” Oliver explains. “Each enterprise approaches them in the way that makes sense for their particular needs. But the stages are interrelated and they build on each other.”

Given that data is the biggest asset that businesses have to work with today, how do these organizations become and remain agile when dealing with the large volumes and multiple structures of data that confront them? And how do they avoid the “wild west” mentality that delivers speed at the expense of data governance and documentation?

A major paradigm shift involves moving away from a focus on transactions to a focus on behaviors. Transactions are a core business concept, but they do not reflect the complexity of the challenges that businesses face today. The enterprise must be focused on both human and machine behavior, and must drive decisions from a behavioral perspective.

How does the enterprise structure an environment in which people can easily work with each other? How do they eliminate silos and connect the people who might be one floor apart doing the same thing? The Sentient Enterprise introduces an approach that might be described as “LinkedIn for analytics.”

Another core paradigm is that of the app economy. While app development within the enterprise is usually locked away in IT, today’s reality is that everyone has a smartphone and there are many potential app developers throughout the organization. In the new model, those with the basic interest and skill set for developing analytical apps are given the tools and training they need to build apps, test them, and roll them out as needed.

In the accelerated, real-time environment in which business operates today, decisions can’t wait for a decision-maker to navigate the maze of permissions and filters the enterprise has traditionally put in place. Frequently, decisions must be made in great numbers and at faster-than-human time scales. The enterprise must leverage decisions on the spot, and surface those that require someones to step in and make them. Artificial intelligence is opening up a path by which human decision -making can be encoded into the enterprise.

In the podcast, Oliver cites several diverse examples of companies already achieving success with the Sentient Enterprise methodology, including Volvo, Blizzard Entertainment, and the San Francisco Giants. And he predicts that there are many more such stories to come.

“Agility is a continuous improvement process,” explains Oliver. “Companies must expect a lot more of themselves than they have before, and align themselves with ever-increasing velocity.

“That’s the key not only to being a survivor, but also to redefining your industry.”