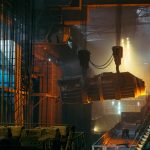 Phil and Stephen review stories about big engineering breakthroughs — and the big economic changes they may lead to.
Engineer Creates Green Oasis by Growing Glaciers in the Desert

Sonam Wangchuck is an engineer who lives in Ladakh: a village that sits 11,500 feet up in the southern Himalayas.

This Startup Is Disrupting The Construction Industry With 3D-Printing Robots

CEO and cofounder of Cazza, a 3D printing construction technology launched in 2016.

Researchers at RMIT University in Melbourne have created a revolutionary new solar paint that can be used to produce endless amounts of clean energy. The innovative paint draws moisture from the air and splits it into oxygen and hydrogen. As a result, hydrogen can be captured as a clean fuel source.

Graphene-based computer would be 1,000 times faster than silicon-based, use 100th the power

A future graphene-based transistor using spintronics could lead to tinier computers that are a thousand times faster and use a hundredth of the power of silicon-based computers.