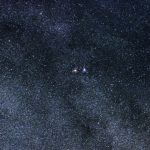 Phil and Stephen review future-facing news on a variety of topics.

When the tumor reaches a certain density, the study found, it releases two proteins called Interleukin 6 and Interleukin 8, signaling to cancer cells that things had grown too crowded and it was time to break off and head into other parts of the body.

New evidence that all stars are born in pairs

We ran a series of statistical models to see if we could account for the relative populations of young single stars and binaries of all separations in the Perseus molecular cloud, and the only model that could reproduce the data was one in which all stars form initially as wide binaries. These systems then either shrink or break apart within a million years.”

Compared with a group of flatworms that never left Earth, the spacefaring worms showed some unexpected effects from their time off the planet: most notably, the rare sprouting of a second head in an amputated piece of a worm, the researchers documented in a new study.