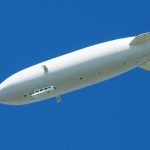 Phil and Stephen explore more super projects, including building airships and saving the planet with a caterpillar that eats plastic bags.

Google co-founder Sergey Brin has been known to enjoy ambitious flights of technological fancy, but this may be his flightiest: Bloomberg reports the enigmatic billionaire, who favors dark attire and once leapt out of an airplane wearing Google Glass to promote the launch of the wearable, is now working on a secret airship in a NASA hangar.

Brin’s interest in zeppelins isn’t purely an anachronistic tick — the Hybrid Air Vehicles HAV 304 Airlander 10 hybrid airship, depicted in the image above, holds the record as the world’s largest aircraft and has some promising benefits for potential military operations, including a very low operational heat signature and radar profile.

“The wax worm, a caterpillar typically used for fishing bait and known for damaging beehives by eating their wax comb, has now been observed munching on a different material: plastic bags.

To make sure the worms weren’t just chewing through the plastic but actually eating it, the researchers pureed some worms and left the paste in contact with the plastic; after 14 hours, about 13% of the plastic was gone, suggesting that some compound in the worm’s digestive system was truly digesting the bag. The researchers also scanned the chewed-up bags for residue, and found ethylene glycol—the main compound in antifreeze—was left behind, “confirming [polyethylene] degradation.”

Jürgen Schmidhuber on the robot future: ‘They will pay as much attention to us as we do to ants‘

The German computer scientist says artificial intelligence will surpass humans’ in 2050, enabling robots to have fun, fall in love – and colonise the galaxy.