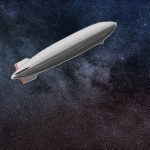 Their airships would be constructed and inflated at an altitude of 140,000 feet on a high altitude platform, his “Dark Sky Station” so called because it is so high in the atmosphere that the sky there is dark, just as it is when seen from space, even at midday. They would be far too flimsy to survive at ground level, but would be fine for flight at that height above all the weather in our atmosphere. Passengers would travel up to this platform in a more conventional stratospheric airship, then transfer to the orbital airship for the final stage of their journey. They then slowly accelerate to orbit over a time period of several days.

He can’t get enough power to accelerate all the way to orbital velocity.
He won’t be able to generate aerodynamic lift above the conventional “Karman line”
The Dark Sky Station would be too heavy to be buoyant at 240,000 feet, or else would be too fragile to last long.

What are the advantages of this approach vs. Space elevator?