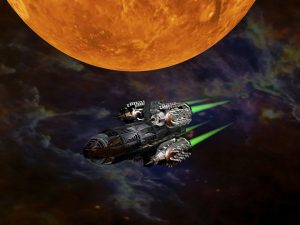 Elon Musk, the founder of SpaceX and Tesla, has made trips to Trump Tower. He met with Trump and the Washington Post has been reliably told, discussed Mars and public-private partnerships…

How an Interstellar Starship Could Actually Explore Alpha Centauri

As part of the Breakthrough Starshot Initiative, Milner plans to invest $100 million in an effort to develop an ultra-light autonomous lightsail that can be accelerated to one-fifth the speed of light (60,000 km/s, or 37,350 miles/s). At this ludicrous speed, a sail-driven robotic probe could reach Alpha Centauri—the closest star system to Earth—in just 20 years, as opposed to 100,000 years using traditional chemical thrusters.
Breakthrough Starshot Initiative

Breakthrough Starshot aims to demonstrate proof of concept for ultra-fast light-driven nanocrafts, and lay the foundations for a first launch to Alpha Centauri within the next generation. Along the way, the project could generate important supplementary benefits to astronomy, including solar system exploration and detection of Earth-crossing asteroids.

Question asked: is this a foretaste of ad-hocracy?