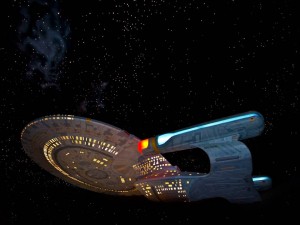 Hosts Phil Bowermaster and Stephen Gordon do some erious geeking out.

Yes, There Have Been Aliens

In our recent paper, Professor Sullivan and I did this by shifting the focus of Drake’s equation. Instead of asking how many civilizations currently exist, we asked what the probability is that ours is the only technological civilization that has ever appeared. By asking this question, we could bypass the factor about the average lifetime of a civilization. This left us with only three unknown factors, which we combined into one “biotechnical” probability: the likelihood of the creation of life, intelligent life and technological capacity.

“The fan production must … not exceed 30 minutes total, with no additional seasons, episodes, parts, sequels or remakes.”

There’s plenty of good Trek around produced by fans. Is everybody up to date?

Phil is especially impressed by: