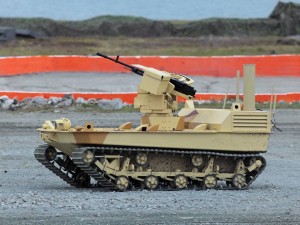 Phil and Stephen reminisce about the good old days when “killer robots” was just a joke.

Amid a federal investigation, ignorance of the technology’s limitations comes into focus

The crash occurred on a Florida highway when an 18-wheel tractor-trailer made a left turn in front of a 2015 Tesla Model S that was in Autopilot mode and the car failed to apply the brakes, the National Highway Traffic Safety Administration (NHTSA)—which is investigating—said in a preliminary report. “Neither Autopilot nor the driver noticed the white side of the tractor-trailer against a brightly lit sky, so the brake was not applied.”

“Negotiations broke down. We had an exchange of gunfire with the suspect,” Dallas police chief David Brown explained in a press conference. “We saw no other option but to use our bomb robot and place a device on its extension for it to detonate where the suspect was.”

What do these stories tell us about future mortality related to robots?
OTHER GEEK