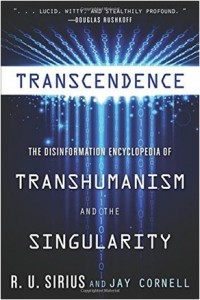 Authors R. U. Sirius and Jay Cornell discuss their new book, Transcendence: the Disinformation Encyclopedia of Transhumanism and the Singularity.

In nearly ninety A-Z entries, Transcendence provides a multilayered look at the accelerating advances in artificial intelligence, cognitive science, genomics, information technology, nanotechnology, neuroscience, space exploration, synthetic biology, robotics, and virtual worlds that are making transhumanism a reality. Entries range from Cloning and Cyborg Feminism to Designer Babies and Memory-Editing Drugs. In addition, the book notes historical predecessors and personalities, both in mythology and history–ranging from Timothy Leary to Michael Jackson to Ray Kurzweil. It also introduces the culture around Transhumanism, covering all the geeky obsessions of the Transhumanist movement.

Want to get un-disinformed about Transhumanism and the Singularity?

Also, check out their site.

R. U. Sirius (Ken Goffman) is a writer, editor, and well-known digital iconoclast. He was co-publisher of the first popular digital magazine, Mondo 2000, from 1989-1993 and co-editor of the popular Book Mondo 2000: A user’s Guide to the New Edge. He has written about technology and culture for Wired, Rolling Stone, and Boing Boing. He also lectures widely.