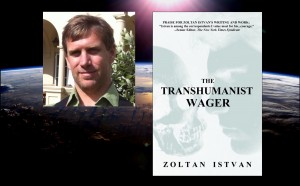 Best-selling author Zoltan Istvan joins Phil and Stephen for a discussion of his widely acclaimed and controversial novel The Transhumanist Wager. This near-future thriller tells the story of a man determined to transform the world in his lifetime — and he will stop at nothing to achieve his goal.

Bestselling author Zoltan Istvan, an American-Hungarian, began a solo, multi-year sailing journey around the world at the age of 21. His main cargo was 500 handpicked books, mostly classics. He’s explored over 100 countries—many as a journalist for the National Geographic Channel—writing, filming, and appearing in dozens of television stories, articles, and webcasts. His work has also been featured by The New York Times Syndicate, Outside, San Francisco Chronicle, BBC Radio, NBC, ABC, CBS, FOX, Animal Planet, and the Travel Channel. He is a philosophy and religious studies graduate of Columbia University and resides in San Francisco with his daughter and physician wife. Zoltan also blogs for Psychology Today and The Huffington Post.

New Technology Podcasts with The World Transformed on BlogTalkRadio